Pharmacy technician Vicky is talking to Lavanya Sharma, who has come in for a prescription for her husband.

“We’ve done OK with Harun shielding, but I’m glad to be out of the house now,” says Lavanya. “This is the first time I’ve gone anywhere and it all feels a bit overwhelming. Tell me, should I be wearing a mask? I’ve heard such conflicting things.”

It’s a simple enough question, but the answer is remarkably complicated. Last month, the English Government advised the public to consider wearing face coverings in enclosed public spaces such as shops. This was based on advice from the Scientific Advisory Group for Emergencies (SAGE), which said that such garments could provide protection in terms of reducing spread from those who have a coronavirus infection but are not showing symptoms, and could be beneficial in some places where social distancing measures were difficult to maintain. The evidence of effectiveness is limited, and the protection they afford to wearers is unknown.

From 15 June, the wearing of face coverings on public transport in England became mandatory, with exemptions for children, disabled people and those with breathing difficulties. Those who don’t comply can be stopped from travelling and potentially fined. The Government is working with the devolved nations on similar rulings.

Currently (8 June), the Government says masks do not need to be worn outdoors, while exercising, in schools, in workplaces such as offices or retail, or by those who may find them difficult to manage, for example, young children or individuals with breathing difficulties. Masks can be made at home using scarves or other textiles rather than using surgical or medical grade masks, as these should be prioritised for healthcare workers working in higher risk environments.

Gloves are not recommended outside healthcare settings, with the World Health Organization (WHO) stating that wearing gloves can actually increase risks, as it can lead to self-infection or transmission to others through touching contaminated surfaces and then not following that by removing or replacing gloves and adhering to hand hygiene measures.

The WHO announced on 5 June that “governments should encourage the general public to wear masks where there is widespread transmission and physical distancing is difficult, such as on public transport, in shops or in other confined or crowded environments”. People over 60, as well as those in high-risk groups, should wear medical grade masks and all others should wear a three-layer fabric mask, WHO advises. Masks are not a standalone measure and are only effective when used in combination with frequent hand cleaning with soap and water or an alcohol-based hand sanitiser product; avoiding touching eyes, nose and mouth at all times; and social distancing measures.

Even then, masks have to be used correctly. The covering should extend over the mouth and nose, with no gaps between the face and cloth. The mask should not be touched while being worn, and if it is, hands should be immediately cleaned thoroughly. If the mask becomes damp, it should be replaced by removing it from behind (without touching the front), discarding into a closed container such as a plastic bag, cleaning hands and then putting on a new one. Used fabric face masks can be washed with other laundry using normal detergent, and while the best textiles to use are tightly woven cottons or twill, natural silk, or quilted cotton, anything with a close weave is suitable. For face masks that have a filter pocket, a sheet of kitchen roll can be used as a filter.

There are downsides to using face coverings, such as giving a false sense of security, with individuals wearing them tending to overlook other, often more effective, measures as a consequence. They can also be contaminated by the individual wearing them, or by other people coughing and sneezing and, if not replaced or laundered, can actually act as a reservoir for infection. There can be other problems too, from discomfort and breakdown of facial skin from frequent or constant wearing, to difficulties with breathing or communication.

•  Read the latest guidance about wearing face coverings from the WHO

•  Watch the WHO videos on whether wearing a mask affords protection against coronavirus and when and how they should be worn. There is also Government information on how to wear a mask. 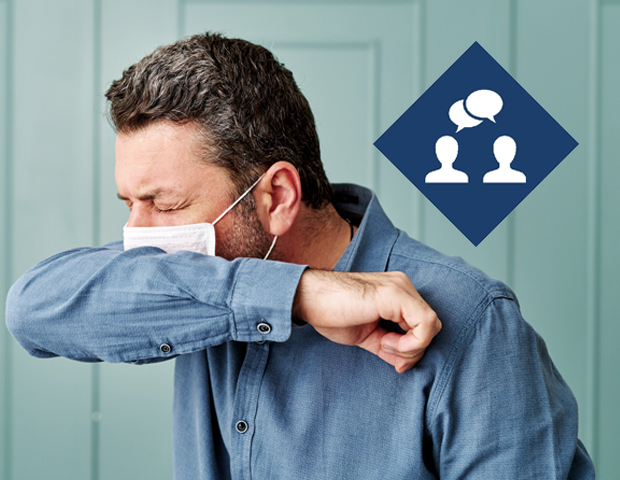