How does the NHS Long Term Plan fit with calls for greater investment in self care – and what role can community pharmacy play?

The NHS Long Term Plan was launched in January this year with the goal of setting out the health service’s key ambitions over the next decade. Greater investment in primary care, increasing use of digital technology and improved mental health services are just some of the headline commitments in this landmark document.

The Long Term Plan has been described as wide in scope but light on detail. This isn’t altogether a bad thing, as it is more concerned with broad aspirations than the nitty-gritty of how they will be implemented. Nonetheless, anyone tasked with carrying out the plan – particularly those working in community-based care, where NHS England says there should be much greater emphasis – is right to ask what it might mean for their role.

One clear theme in the Long Term Plan is a greater emphasis on preventative care – helping people to be healthier for longer by addressing lifestyle issues like diet, exercise and smoking before these land them in hospital. As well as benefiting individuals and the wider economy, this can relieve some of the strain on the massively oversubscribed health service, it is argued.

Key to this agenda is greater utilisation of primary care services such as community pharmacies. As the plan states, the overarching aim of the NHS is to “prevent as much illness as possible… then illness which cannot be prevented should, where possible, be treated in community and primary care”. And when hospital care cannot be avoided, “its goal is treatment without having to stay in as an inpatient wherever possible”.

OTC medicines trade body the Proprietary Association of Great Britain (PAGB) has long been a vocal advocate for people taking ownership of their health. The Association saw in the plan an opportunity to take the self care message further than ever before and in March published A Self Care White Paper: supporting the delivery of the NHS Long Term Plan.

Warm words about preventative care are all well and good, the PAGB says, but real change will only be brought about “by also empowering people to live well and take responsibility for their health, shifting the system towards a greater focus on self care”. This won’t happen without “coordinated national action”, and the white paper sets out a roadmap for precisely this.

It contains a number of possible solutions, ranging from the digital – such as self care apps and giving pharmacies greater access to patient data – to the behavioural. For example, the PAGB recommends that GPs be encouraged to issue ‘recommendation prescriptions’ for lifestyle changes like healthy eating, like they do in Germany.

In the introduction, the PAGB states that “demand and pressure on NHS services have reached unprecedented levels, and a significant proportion of this comes from people going to their GP for self-treatable conditions”.

There are roughly 18 million GP appointments every year for self-treatable conditions, including 5.2 million for blocked noses, over a million for backache, and 40,000 for dandruff. Each of these “could reasonably be dealt with elsewhere”, the PAGB argues.

A survey of 5,011 UK adults that was commissioned as part of the white paper found that while a vast majority believe it is important to ease NHS pressures by taking responsibility for their own health, there is often a disconnect between ideals and behaviour. For example, around a third said they visit GPs for self-treatable conditions.

Sarah Jarvis, a West London GP and resident doctor for the BBC’s Jeremy Vine Show, feels that “up to one in four, certainly one in five of the patients, I see could have been helped by community pharmacy just as well as they could by a GP – possibly more effectively”.

This is borne out by a 2018 primary care audit that found about a fifth of GP appointments are potentially avoidable, often because the problem could have been dealt with by another local service.

Much of this is due to entrenched attitudes among the public. However, while there may be challenges in raising self care awareness, when it’s explained to people properly they are very receptive, says Bristol pharmacist Ade Williams.

Ade believes self care fits with the direction of travel in healthcare generally and pharmacy in particular, saying it “chimes with the healthy living pharmacy ethos and a more proactive approach to delivering person-centred care”. He says that “as more people appreciate the expertise and competence of the pharmacy team [raising awareness] becomes easier to do”.

This may require teams to be more introspective, he says. “Are you a local wellbeing centre for the community, or do you present yourself as just a dispensing hub or medicines retailing outlet?”

While the Long Term Plan rightly focuses on tackling health inequalities, the PAGB believes that its focus is “largely on outcomes rather than longer-term prevention”, and that to address the root cause of inequalities we need to start much sooner.

The Association points to data suggesting that between 43 per cent and 61 per cent of English working age adults struggle to understand health information, with health literacy disproportionately low among people from a disadvantaged background.

The PAGB argues that conversations need to start happening at school in order to shape the next generation’s attitudes. In concrete terms, this means making self care guidance a mandatory part of the national school curriculum.

The Association welcomed recent draft guidance from the Department for Education that recommended making personal, social and health education (PSHE) compulsory in state schools, but said this alone does not “go far enough to improve health literacy”.

Chief executive John Smith said the PAGB was “concerned there is not enough time available to devote to health literacy and wellbeing education and there is not a standardised approach across schools”.

Calling on the Department for Education to revisit its guidance, Self Care Forum chair Dr Selwyn Hodge commented that the chance to “ensure the youngest members of our society receive that information at school is a missed opportunity”.

Dr Jarvis says she regularly sees the impact of poor health literacy in her practice. Patients are often “unaware that the medications they think they need, such as antibiotics, carry risks to them, as well as increasing the risk to others, such as antibiotic resistance”.

In the case of antibiotics, taking the time to explain the potential risks of taking an unnecessary course and giving patients an idea of the likely timeframe for recovery often provides reassurance, she says.

In addition to updating the school curriculum, the PAGB recommends that self care techniques and signposting to appropriate use of NHS services are included as core components in healthcare professionals’ training.

Ade agrees, saying this “will help to ensure that HCP’s see self care as core to population health” and boost the public’s appreciation of the work community pharmacy does. 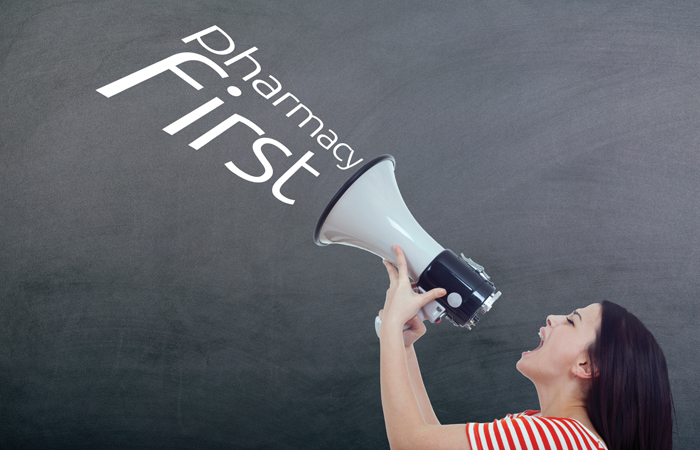 Another issue highlighted by the report is the short-term nature of many public health campaigns. NHS campaigns like Stay Well This Winter and Stay Well Pharmacy are certainly useful, but are “short-term bursts of activity, largely focused on the winter months to reduce demand pressures,” says the PAGB.

A year-round campaign would “facilitate longer-term behaviour change, relieving avoidable pressure on services and educating the public on how pharmacists can help them stay well as the first point of call for qualified NHS advice.”

To Ade, this is a sensible idea. “The current message seems to be too linked to the perennial winter health crisis; it can sound like ‘don’t see your busy GP or A&E, go to the pharmacy instead’ – rather than shouting about pharmacy’s unique selling points.”

This may be well intended, but “we need to be more savvy with the messaging”, he says. “It would be nice to see public research of the message perception published to inform what is working and how it’s coming across.”

Dr Jarvis adds that we “need to help the public realise [pharmacy teams] are just as much a part of the primary healthcare team as the GP, the practice nurse and the healthcare assistant”.

Health literacy disproportionately low among people from a disadvantaged background

There are more than 11,000 community pharmacies in England, and the vast majority of people are within a 20-minute walk of their local pharmacy. The accessibility and professional expertise that the sector offers makes it ideally suited to improving public health – and the potential doesn’t lie only with pharmacists.

Ade Williams says every member of the wider pharmacy team is “very well placed” to promote self care, and that the public values the holistic offer just as much as pharmacists’ expertise. Commenting that training and learning is key, he advises: “Ensuring that soft and clinical skills are in place and regularly updated will ensure that consistently high standards of evidence-led care are provided.”

Pharmacy support staff have multiple interactions with the public and “should be seen as the shop window to sell pharmacy’s ability to care effectively for our community”, Ade says.

Commenting that pharmacy counter staff and dispensing assistants work every day with medicines and are well versed in self care, Dr Jarvis concludes: “Getting additional training in common minor ailments, including knowing which treatments provide rapid relief, puts them in an ideal position to help customers who just want to feel well enough to get on with their lives.”

Treating acid reflux and heartburn in the pharmacy